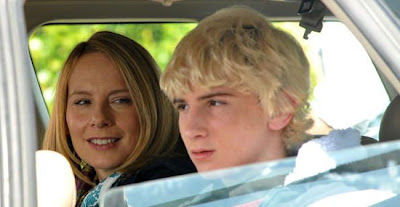 I think there is far too many films opening in Australian cinemas on Thursday, with a total of six scheduled to start screening. They include the long delayed collaboration between John Favreau, Ron Howard and Steven Spielberg, Cowboys and Aliens, the rom-com of the week, Friends with Benefits, the re-boot of Conan the Barbarian, the delightful comedy/drama, Win Win, Wim Wenders' 3D musical, Pina and the absorbing documentary, Page One: Inside the New York Times.


Win Win - Paul Giamatti headlines writer/director Tom McCarthy's comedy/drama centering on a beleaguered attorney and part-time wrestling coach who schemes to keep his practice from going under by acting as a legal caretaker of an elderly client. Mike Flaherty's (Paul Giamatti) brilliant plan hits an unexpected hitch when his client's troubled grandson shows up looking for a place to stay. With his home life in turmoil and both of his careers in jeopardy, Mike quickly realises that he'll have to get creative in order to find a way out of his predicament. It's an often-hilarious, heartfelt delight with strong performances from the entire cast. It's an assured winner that's nearly impossible not to like.


Cowboys and Aliens - It's 1875 in New Mexico. A stranger (Daniel Craig) with no memory of his past, stumbles into the desert town of Absolution. What he discovers is that the people of Absolution don't welcome strangers and nobody dares take a step out of line unless ordered to do so by the iron-fisted Colonel Dollarhyde (Harrison Ford). But Absolution is about to experience fear it can scarcely comprehend as the desolate city is attacked by marauders from the sky. Now, the stranger they had initially rejected is their only hope of salvation. As the gunslinger starts to remember who he is, he realises he holds a secret that could give the town a fighting chance against the alien force. Just about every review I have read has stated that this was a serviceable Western until the aliens arrive, which turns it into nothing short of a misguided mess. I'm not going to test out that theory.


Friends with Benefits - Dylan (Justin Timberlake) and Jamie (Mila Kunis) think it's going to be easy to add the simple act of sex to their friendship, despite Hollywood romantic comedies would have them believe. They soon discover however that getting physical really does always lead to complications. Looks like it conforms to the well-worn formula, but the largely positive reviews have commended the chemistry between the likeable leads, which might be enough to carry this above the standard outing.


Conan the Barbarian - A quest that begins as a personal vendetta for the fierce Cimmerian warrior turns into an epic battle against hulking rivals, horrific monsters, and impossible odds, as Conan (Jason Momoa) realises he is the only hope of having the great nations of Hyboria from an encroaching reign of supernatural evil. Released through Lionsgate, there has been so few reviews about this film that I have no idea what to expect. I'll post the trailer below.


Pina - Pina, I believe, is a 3D musical written and directed by Wim Wenders (Paris, Texas and The Wings of Desire). It is an homage to the late choreographer Pina Bausch (1940-2009), a leading influence in the development of the Tanzheater style of dance.


Page One: Inside the New York Times - Filmmaker Andrew Rossi deftly gains unprecedented access to The New York Times newsroom and the inner working of the Media Desk. With the internet surpassing print as our main news source and newspapers all over the country going bankrupt, Page One chronicles the transformation of the media industry at its time of greatest turmoil. Writers like Brian Stelter, Tim Arango and the salty but brilliant David Carr track print journalism's metamorphosis even as their own paper struggles to stay vital and solvent.

Weekly Recommendation: Win Win is the only film I have seen so far, but I really enjoyed it. It is my pick. Of the others, Page One: Inside the New York Times should be the most interesting experience, Friends with Benefits the most fun. If you are yet to see Senna, I can wholeheartedly recommend it too.
Posted by Andy Buckle at 6:06 PM