Nashville. A film considered by many to be one of the greatest American films of all time, but also one that seems to be passionately disliked by many. Based on what I had been told about Nashville prior to seeing it, I half expected to hate it. Honestly, I’m not really sure what to make of the film yet, but I know I certainly didn’t hate it. I thought it was an extraordinary achievement, but not a film I initially became wholeheartedly engrossed in. I expect this is primarily due to the subject matter. But, I have a feeling that it will become more rewarding over time, and even thinking about the film today, and trying to come up with something intelligible, I have found that subtle details from the film are flooding back into my consciousness. Henry Gibson’s opening song in the recording studio is stuck in my head, and I can’t shake that final scene. Okay, so maybe I am a little obsessed. 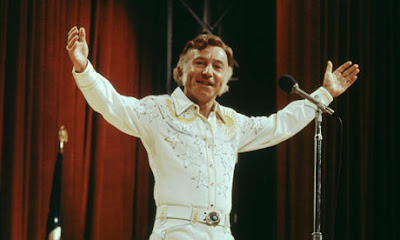 I can certainly see why it was so acclaimed back in the mid 70’s and believe it or not, I think it still holds up pretty well today. While Altman made a couple of films between McCabe & Mrs. Miller and Nashville, I figured this was a significant film in his career and essential viewing for someone catching up on Altman. While my knowledge about the country music industry in Nashville, Tennessee and the political unrest at the time, is next-to-nothing, this review will be a pretty personal take on some features of the film I admired, and how it made me feel.
I don’t think I have ever seen a director utilize such a huge cast so effectively before. Few have handled it better than Paul Thomas Anderson in Boogie Nights and Magnolia, but even they don’t reach the complexities of Nashville. The film’s ensemble cast is massive, with the film following an incredible 24 central characters as their lives become interwoven in unexpected ways as they each seek out their own individual goals over the course of the film. What I found to be extraordinary is how much we learn about each of these characters, and how memorable many of them are for different reasons. To mention every character will take more time and energy than I can muster, but there are some that I want to recognize. By some, I mean about fifteen.

The film is set, and shot on location, in Nashville during a five-day period that marks the countdown to a presidential primary. A candidate named Hal Phillip Walker, never actually seen onscreen, is running for the Replacement Party. Smooth talking campaign organiser, John Triplette (Michael Murphy), is trying to set up an election-eve rally at Nashville’s Parthenon and enlists Del Reese, (Ned Beatty), a local lawyer, to assist him. Triplette wants country music legend Barbara Jean (Ronee Blakely) to sing at the rally, but the emotionally fragile sweetheart of Nashville faints on the tarmac soon after arriving and is rushed to hospital.
While she wishes to sing, her husband (Alan Garfield) is wary of a political tie-in. A number of other aspiring singers have arrived in Nashville hoping for their big break alongside legends like Jean, Haven Hamilton (Henry Gibson) and Tommy Brown (Timothy Brown). When Jean's arrival is cut short, those in attendance depart the airport and end up stranded on the highway following a pile-up. Most of the characters are revealed in the ensuing scenes here.
One of the many trying their luck at an open mike night is Tom Frank (Keith Carradine), a ladies man who has been trying to avoid his former band members and sleeps with multiple women throughout the film. He finally sets his heart on Reese’s wife Linnea (Lily Tomlin), a gospel singer, after meeting her at a recording studio.
Linnea’s marriage to her husband is strained, and she devotes a lot of time to her two deaf children. One of the most moving moments of the film is when one of her sons enthusiastically tells his parents the story of a swimming lesson. His mother matches his excitement, while his father wearily asks his wife: “What’s he saying?” Linnea goes to a club to meet the singer, just in time to hear his passionate song about her – the Academy Award winning song, “I’m easy.”
A pair of aspiring singers, one a waitress (Gwen Welles) who fails to face the reality that she is talentless, and the other (Barbara Harris), a disheveled looking woman who runs away from her husband seeking an opportunity to sing before finally grasping one through unexpected circumstances, are strong characters. Then there is the loopy, celebrity obsessed BBC radio reporter, Opal (Geraldine Chaplin), whose credentials present a mystery. She's something else.

The way these characters all interrelate is quite astounding. Most of Altman’s scenes are full of people and I got the impression that the musical sequences were live concert footage and that the people in the crowd weren’t extras but music fans who had turned up to listen. Altman’s characters can be spotted in the crowd and his roaming camera always seems to find them. Even when the singers are in full swing, the story continues to be driven purely through these fleeting glimpses of them in the crowd. Of course, the most profound moments are left until the end, as we see a Vietnam War veteran (Scott Glenn), who has been following Barbara Jean throughout the film, even to the point of sleeping in her hospital room, and a loner (David Hayward) who has been drifting around the scene carrying a violin case, stand together in the front row. I'm sure the climactic sequence is known to most people, but I won't spoil it.
There are a few arcs that don’t work, and I’ll single out Shelley Duvall here. I really don’t get the appeal of this woman, and I found her character to be irritating. She plays Martha, a young woman who has come to visit her sick aunt in hospital, but instead spends most of her time changing her clothes and wigs and chasing men around. She is on the arm of almost all of the male characters at one point or another. An odd character that I think works really well is the silent Tricycle Man, played by Jeff Goldblum. He rides around on his long, low-slung three-wheeled tricycle and pops up all over the place, often linking different story arcs together. He never talks, but at times reveals his skills as a magician.

I have been informed that Nashville was a place that ambitious and talented singers could instantly find fame, and the film delves into the opportunities these music festivals presented. But the film is given complexity by endowing each of these characters with a sense of despair and longing, and setting the film around the political primary. Nearly all of the characters are in some sort of state of discontent and are searching for something – be it fame, recognition, love, celebrity interviews, political success or even just for their ill wife to return to health. All of their stories are realized through the music – which I found, for a non-country music fan, to be not only catchy, but also quite profound, and speaking for all the souls we see traverse the frames of the film.
For me, I think the standout performances were Lily Tomlin and Henry Gibson. I found them to be electric whenever they were on screen, but there was just so much happening all the time, with the story jumping around all over the place, that it was a challenge to follow everything and piece it all together. While these individual stories were interesting, when the characters unknowingly come together in a jazz club or on the lawn at the Parthenon, the film hits its heights.
I realize this has not been insightful at all, but I don’t really have much more to say, other than that I have grown to like Nashville quicker than I expected and that I am in awe of how phenomenal Altman’s achievement in ensemble direction is. As a musical, it works, as a social commentary, I assume it works pretty well and as a human drama, I found it quite profound. I’ll watch it again…in a little while. But next, I have decided to watch Popeye, for something weird.
Posted by Andy Buckle at 12:55 PM