A woman has died but she lives on through this (film).


Camera Buff, or Amator (meaning ‘amateur) as the Polish title reads, is an early film from celebrated filmmaker, Krzystztof Kieslowski, who writes and directs. It was released in 1979 and was Kieslowski’s first international and commercial success. I’m not sure if it is perhaps loosely autobiographical, though it documents the artistic and political awakening of lead character, Filip Mosz (Jerzy Stuhr), which would not have been unlike Kieslowsi’s himself. 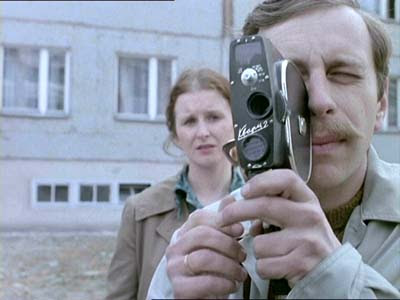 Camera Buff follows the humble factory worker whose newfound hobby, amateur film, swiftly becomes an obsession and wildly transforms his formerly contented life. Having purchased the 8mm camera to film home movies of his first child immediately following birth, the evidently nervous new father soon becomes drawn into the fascination and power of the camera and the possibilities of the medium. He turns all of his attention to filmmaking and ignores his familial responsibilities. Essentially, he finds the passion he has been seeking all of his life and had all but given up finding, on the night his daughter is born.

His responsibility to his wife and daughter slip off his radar as his gaze fixes on Anna Wlodarczyk (Ewa Pokas), a beautiful young 'amateur' who encourages Filip’s filmmaking, the various activities he films and the intriguing and glamorous world of filmmakers and cinephiles. The consequences of such a time-consuming obsession and neglect for his familial responsibilities prove heartbreaking not just for himself, as Filip watches his formerly contented and modest lifestyle slip from his grasp.
Camera Buff is quite an extensive look at breaking into the world of filmmaking and cinema and of a nation crippled by Communism and a man whose artistic ambitions transcended the Party’s political agenda. Above all though, it is about the impacts of misguided obsession. Kieslowski always squeezes into his films a number of complex themes, both on a political level (commenting on Polish, or French society) and on an individual level. Kieslowski manages to tie all this into his own personal agenda too.

What is tragic about this film is that Filip realizes, but all too late, that he should have reflected on the consequences that his camera obsession has on himself, his personal life and his family. Not only would he have learned that his priorities lay in the wrong place, but it would have been the compelling human story he so desired. Instead he creates controversy when he ignores the orders of his local Communist Party boss, who initially hires him to film a Jubilee celebration (which Filip wins an award for), and uses a unique employee and a local housing restoration issue as inspiration for his later films. These are films that are well made, transform Filip into a minor celebrity and are picked up by a television network, but were not at all desired by his financiers. 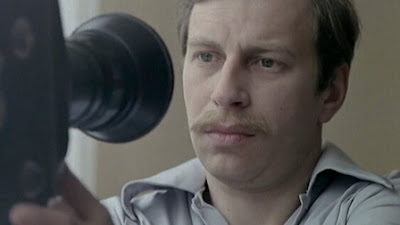 Camera Buff is an extraordinary film, and one that has aged very well. I can certainly see why it was a critical and commercial success back in 1979 but it is no less compelling today. Stuhr’s lead performance is great, but I haven’t been able to shake the thought of how good this film looks, having been shot on 16mm. While the climate is overcast for most of the film, and the small town Filip and his wife live in is far from picturesque, the consistent quality of the image is sublime.

As is Kieslowski’s inventiveness with the camera. Often you think you are watching what Filip is filming (through the lens of his 8mm or 16mm) but then the camera shifts to frame him in the process of filming, clearly discounting that possibility. Simultaneously, as Filip is documenting the oppressive state of living in his small town, Kieslowski is also commenting on Polish society, deftly endowing the film with a sensitive humour and a very evident sympathy for Filip. The great man continues to surprise me.
Posted by Andy Buckle at 2:25 PM