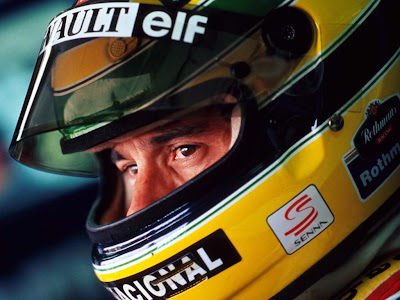 August 11 has been a day I have been looking forward to ever since the 2011 Sydney Film Festival concluded back in June. On the final day I watched Asif Kapadia's mesmerising documentary, Senna, about the tragically shortened racing career of Brazilian Formula One driver Ayrton Senna. It remains my most powerful film experience of 2011. The other films released this week, with the exception of one film (I'm sure) aren't bad either. Jane Eyre is a thoroughly enjoyable period drama, and I have heard some positive feedback about Morgan Spurlock's new doco, POM Wonderful Presents: The Greatest Movie Ever Sold. The final film released this week is Green Lantern, which has been a long time coming. There is a reason for that, people.


Senna (*****) - Spanning his years as a Formula One racing driver from 1984 to his untimely death a decade later, Senna explores the life and work of triple world champion Ayrton Senna, his physical and spiritual achievements on the track, his quest for perfection and the mythical status he has since attained. Even if you have no interest in Formula One racing this is an unforgettable experience. It's about a man who transcends his sport, becomes a beloved icon for his country and an inspiration to people worldwide. Considered the greatest driver who ever lived, his compelling story is told here solely through masterfully edited archival footage. You must see this film.

Jane Eyre (***1/2) - For the umpteenth film/television adaptation of Charlotte Bronte's classic 1847 novel, American filmmaker Cary Fukunaga (Sin Nobre), directing just his second feature, is the man at the helm. Jane Eyre stars Mia Wasikowska (The Kids are All Right) as the title heroine and Michael Fassbender (Hunger) as Edward Rochester. Having completed school, Jane is sent to work as a governess at Thornfield Manor alongside housekeeper Mrs Fairfax (Judi Dench), where she would work as tutor for the daughter of Rochester. Initially Jane is both repelled by his abrupt arrogance and attracted to his swooning charm and intelligence. As Jane grows to desire him, he in-turn develops feelings for her. But a sinister secret from Rochester's past forces her to flee. This is a pretty watchable period piece for people who don't like dramas of that sort. It looks great, and Mia Wasikowska's performance is excellent.


POM Wonderful Presents: The Greatest Movie Ever Sold - Director Morgan Spurlock (Super Size Me) examines the increased proliferation of branding in every aspect of our lives while attempting to persuade big-name brands to sponsor his irreverent expose. In this eye-opening documentary, viewers follow Spurlock as he convinces a variety of high-profile sponsors to let him pitch their products as "The Greatest", while still maintaining complete control over his creative vision - an arrangement that's become increasingly rare in the high-stakes entertainment industry. Been looking forward to this ever since I heard some positive feedback at the SFF. While not particularly enlightening, I have been told, it is a lot of fun.


Green Lantern - In a universe as vast as it is mysterious, a small but powerful force has existed for centuries. Protectors of peace and justice, they are called the Green Lantern Corps. A brotherhood of warriors sworn to keep intergalactic order, each Green Lantern wears a ring that grants him superpowers. When a new enemy called Parallax threatens to destroy the balance of power in the Universe, their fate and the fate of Earth lie in the hands of their newest recruit, the first human ever selected: Hal Jordan (Ryan Reynolds). If you have seen a trailer for this, and you should have considering it has been playing in front of the other Superhero films for months, you will know that this looks, well, shit.

Weekly Recommendation: Senna. You won't be disappointed. Jane Eyre is worth a look too. Please don't spend your hard earned money on 3D Green Lantern, make the trip to your local indie cinema and watch a good film.
Posted by Andy Buckle at 10:58 PM